Atlanta Falcons showed the wrong type of fight on Sunday 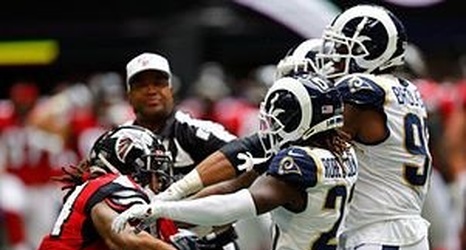 The latest loss for the Atlanta Falcons is symbolic of the disaster of the season that has been. Players tried to make plays and didn’t. In fact, even their attempt to hustle worked against them. Most notably Russell Gage’s attempt to field a punt in the waning moments, fumbling and the Rams recovering for a touchdown.

But even worse than that, the Falcons showed the wrong kind of fight. Looking at you Devonta Freeman. After a normal non-productive day at the office, Freeman decided to pick a fight with the man who wears his Madden rating on his jersey in Aaron Donald.