Atlanta Falcons pass protection needs to be flawless against the Cowboys 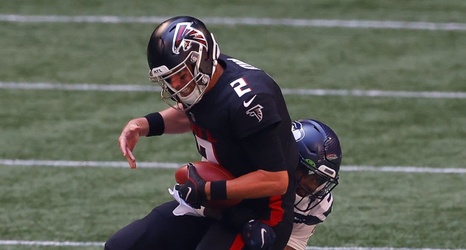 ATLANTA, GEORGIA - SEPTEMBER 13: Matt Ryan #2 of the Atlanta Falcons is sacked by Jamal Adams #33 of the Seattle Seahawks in the first half at Mercedes-Benz Stadium on September 13, 2020 in Atlanta, Georgia. (Photo by Kevin C. Cox/Getty Images)

There is no time for the Atlanta Falcons to feel sorry for themselves.

The Atlanta Falcons schedule doesn’t get easier from here. After the loss on Sunday to the Seahawk, the Falcon will be going up against the Dallas Cowboys. While they have to face another great quarterback in Dak Prescott, that might be the least of their worries.