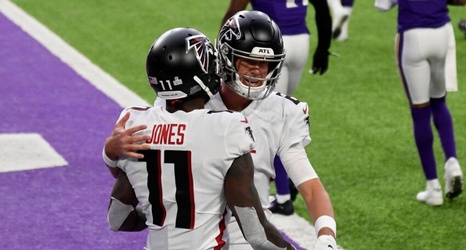 MINNEAPOLIS, MINNESOTA - OCTOBER 18: Julio Jones #11 and Matt Ryan #2 of the Atlanta Falcons celebrate after scoring a touchdown in the first quarter against the Minnesota Vikings at U.S. Bank Stadium on October 18, 2020 in Minneapolis, Minnesota. (Photo by Hannah Foslien/Getty Images)

As the Atlanta Falcons find themselves without Julio Jones for the first time in a decade at the start of training camp, there will still be plenty of competition in the receiver’s room as the Falcons are loaded with plenty of talent to run Arthur Smith’s offense.

Calvin Ridley’s talent and ability to take over the number one receiver’s spot have been well documented, and Russell Gage will be ready to fill the number two slot for the Atlanta Falcons in 2021.