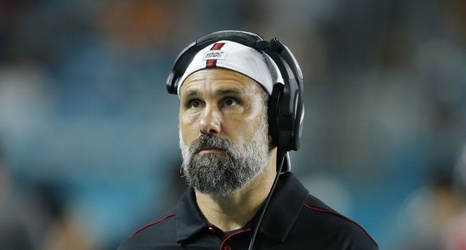 MIAMI, FLORIDA - AUGUST 08: Linebackers coach Jeff Ulbrich of the Atlanta Falcons looks on against the Miami Dolphins during the preseason game at Hard Rock Stadium on August 08, 2019 in Miami, Florida. (Photo by Michael Reaves/Getty Images)

Atlanta Falcons defense looked as good as ever Thursday night against the Panthers.

The Panthers came into the game against the Atlanta Falcons without a win since these two teams met in Atlanta a few weeks ago. They now have a three-game losing streak and the Falcons improved to 2-1 under Raheem Morris.

When Morris gives away game balls in the locker room tonight, hopefully, he gives one to defensive coordinator Jeff Ulbrich as he had this defense focused for the first time in years.