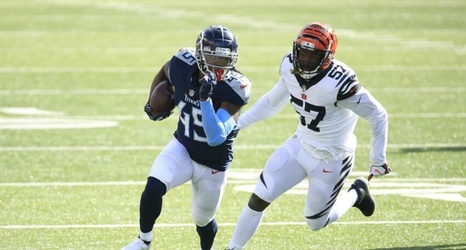 CINCINNATI, OHIO - NOVEMBER 01: D'Onta Foreman #45 of the Tennessee Titans runs with the ball against the Cincinnati Bengals at Paul Brown Stadium on November 01, 2020 in Cincinnati, Ohio. (Photo by Andy Lyons/Getty Images)

The Atlanta Falcons are bringing free agent running back D’Onta Foreman into their camp this week giving the free agent a try out of sorts. Foreman in Atlanta would be a bad move despite the team needing depth.

D’Onta Foreman and the Atlanta Falcons are an interesting pairing and speak to the team’s need to add depth at the position.

Foreman will be brought into Falcons’ camp this week and given a chance to prove he deserves to be signed despite the lack of production in his career.