Redskins vs. Falcons: 3 Things We Learned From Each Team 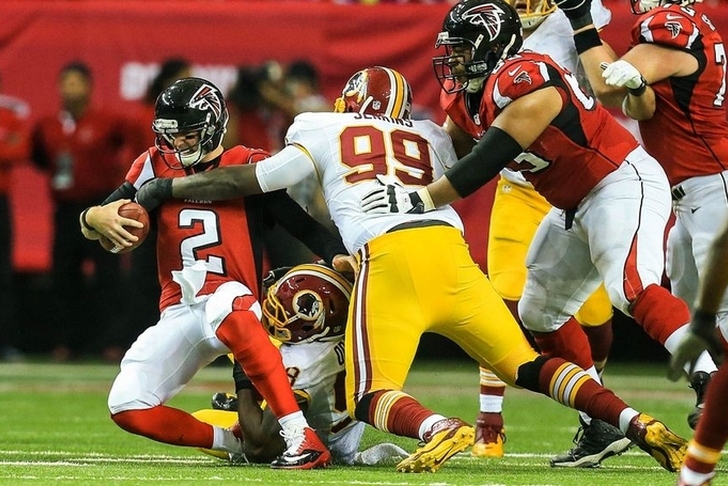 The Atlanta Falcons barely survived against the Washington Redskins, winning 25-19 thanks to a pick-six in overtime. The Falcons improve to 5-0, while the Redskins fall to 2-3. Here are three things we learned about each team in the Falcons' win.

Kirk Cousins is not starting material. For the life of me, I can't figure out why Cousins has gotten so much benefit of the doubt. We know who he is at this point. He'll make some plays, but commits far too many turnovers. Cousins isn't going to guide the Redskins to postseason. I'd much rather give Colt McCoy or Robert Griffin III a chance.

The defense is pretty good. Give the Redskins' defense credit; they shut down a potent Falcons offense for much of the game. The defense has played well for much of the season and it's a big reason why Washington was still in this game. Julio Jones wasn't 100 percent, but holding him to five catches and 64 yards is still impressive.

The ground game needs consistency. The Redskins had issues running the football and the offense hasn't been able to consistently move the ball on the ground this season. There have been flashes, but nothing steady. Matt Jones, Chris Thompson and Alfred Morris have split carries and no one has proven they can consistently be "the man" this season.

The Falcons are probably going to the playoffs. Teams that start the season 5-0 make the playoffs 91 percent of the time. Playing in a weak NFC South, where only the Carolina Panthers seem like contenders, the Falcons have great chance to make a deep postseason run.

Julio Jones isn't himself. Jones was not 100 percent this week and it showed. He played great to start the season, but needs to get healthy. Having him sit out a game isn't a terrible idea.

Devonta Freeman might have stolen the starting job. Tevin Coleman was the Week 1 starter, but Freeman has killed it since Coleman was injured. Coleman only saw two carries this week, while Freeman ran it 27 times. I expect Coleman to get more carries in the future, but it looks like Freeman is now the clear starter.