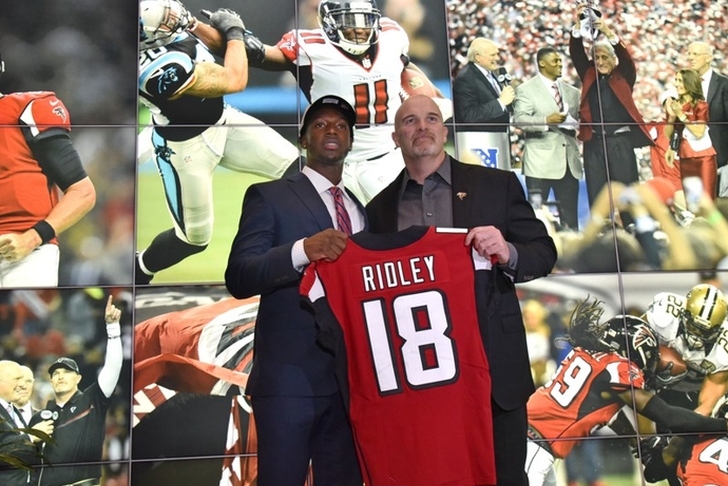 USA Today
Grade: A
Breakdown: "Looks like another masterful job by GM Thomas Dimitroff. He didn't overthink it when WR Calvin Ridley was sitting there at No. 26 or when CB Isaiah Oliver was there at No. 58. Neither addressed a need, yet both provide significant upgrades to an already stacked roster. DL Deadrin Senat did fill a crack in Round 3."

ESPN
Grade: B
Breakdown: "Atlanta lost wide receivers Taylor Gabriel and Andre Roberts in free agency, and we knew the Falcons were going to address the position at some point in this draft. And after the season Calvin Ridley had at Alabama, I never thought he'd be available at No. 26. But then his testing numbers at the combine were just average, and he started to drop. Listen, you have to trust the tape with Ridley. He's an advanced route runner who just gets open, and that's against SEC defenses and some of the best defensive backs in the country. That's why making him the No. 3 wideout behind Julio Jones (another Bama star) and Mohamed Sanu is a great move. Matt Ryan has to be elated with his options, and the NFC South only got tougher this offseason.

"Elsewhere, defensive tackle Deadrin Senat (pick 90) could be a straight replacement for Dontari Poe, who left for the Panthers in free agency. Cornerback Isaiah Oliver (58) is a supreme athlete who also returned punts for the Buffaloes. Ito Smith (126) is insurance in case they can't retain Tevin Coleman. Smith is only 5-9, but he'll help in the passing game -- he had 140 career receptions.

"If there's a qualm with this class, it's that there's no guard, and they could have used a young guy to push the starters. Still, I like Ridley, Oliver and Senat."

Bleacher Report
Grade: B+
Breakdown: "While it was expected the Atlanta Falcons would beef up their defensive line early in the draft, general manager Thomas Dimitroff pivoted when Alabama star receiver Calvin Ridley was still on the board. It's a tremendous fit as Ridley will occupy Taylor Gabriel's old role. The speedy Ridley is similar to Gabriel as a capable route-runner with deep explosiveness and quickness on underneath routes.

"Day 2 brought more good players into the fold. Cornerback wasn't an immediate need, but Isaiah Oliver has the tools to develop into a plus boundary corner in the future. Incumbents Desmond Trufant and Robert Alford are talented and versatile enough to move into the slot if Oliver proves ready in 2018. Third-round defensive tackle Deadrin Senat is also a stout presence in the middle, addressing the team's average run defense."

SB Nation
Grade: B
Breakdown: "Most, including me, thought the Falcons’ draft had to start with a defensive tackle. But Atlanta passed on a few good ones early, including Taven Bryan, before taking Deadrin Senat with the 90th pick. He should get a lot of snaps on that defensive line.

"The Falcons opened things with Alabama wide receiver Calvin Ridley in the first round. This may or may not say something about the future of Julio Jones. Ridley is at worst a very high end No. 2 receiver because he runs nearly perfect routes and has good hands. Cornerback Isaiah Oliver was one of the steals of the second round. He can handle the physicality of NFC South receivers like Mike Evans and Devin Funchess.

"With Tevin Coleman entering the final year of his rookie deal, the picked up Southern Miss running back Ito Smith. He’s not a big power back, but he’s ultra quick and will make defenders miss in open space. he can catch the ball pretty well too. That’s one of the better Day 3 picks of the draft."

Yahoo Sports
Grade: B
Breakdown: "The Falcons got a good value pick with receiver Calvin Ridley at 26th overall. Isaiah Oliver is the type of bigger cornerback the Falcons like, and they hope big tackle Deadrin Senat helps fix their defensive line need. The Falcons were mostly quiet in trades but when they did trade up, it was to get receiver and special teams ace Russell Gage in the sixth round. That’s a great late pick because at a minimum he’ll have an instant impact in the kicking game."

Sports Illustrated
Grade: C+
Breakdown: "The Falcons came into the draft with just one capable contributor at defensive tackle (rising fourth-year star Grady Jarrett), but GM Thomas Dimitroff and head coach Dan Quinn didn’t address that position until the third round—one can assume that they felt the talent available at No. 26 and No. 58 was too great to ignore.

"Atlanta didn’t need help at wide receiver, but every NFC South team gulped when it swiped Calvin Ridley, a player seen by some as Antonio Brown lite. Playing opposite Julio Jones and outside of Mohamad Sanu, he’ll face favorable coverage looks snap after snap. Isaiah Oliver is a long-armed, makeup speed type corner, which Quinn has always liked. He can be another version of Jalen Collins (out of the league due to repeated failed drug tests), but Atlanta already had a tremendous duo signed long-term in Desmond Trufant and Robert Alford, and a sturdy slot presence in Brian Poole. Does Oliver’s arrival mean Alford will eventually play fulltime in the slot? However you shape it, this was a luxury pick. So was running back Ito Smith, who was taken one round behind defensive tackle Deadrin Senat. Quinn employs a litany of defensive line rotations, and the Falcons may regret not finding more forces inside."