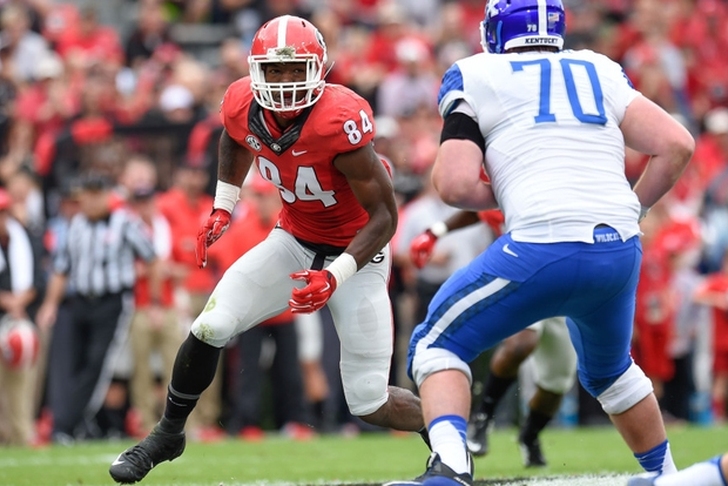 We're already a few weeks into NFL Free Agency, and while the Atlanta Falcons haven't been among the most active teams early, they might not be done making moves yet. With that in mind, here are all of the interesting rumors and news tidbits around the Falcons.

Falcons targeting Leonard Floyd?
Atlanta has placed a big priority on improving their pass rush this offseason, and that may continue with their first-round pick in the draft in the form of Georgia DE/OLB Leonard Floyd. Via AtlantaFalcons.com's Kelsey Conway:

His solid 40-yard dash time (4.60 seconds) and his 39.5-inch vertical coupled with his size and length caught the eyes of many NFL scouts and coaches. And the Falcons' attendance list at Georgia’s pro day proves every bit of that.

Draft analysts have recently added Floyd to their mock drafts, switching from the popular names of Ragland and Lee for the Falcons. NBC TV's Cris Collinsworth believes the UGA product could fill several roles for Atlanta.

“If you like the versatility of Jamie Collins from the Patriots, you will like Leonard Floyd. Floyd can rush the passer, play inside linebacker, and looks athletic enough to cover backs and tight ends, which is becoming such an important trait for linebackers,” Collinsworth said of his pick for the Falcons. “Floyd is a little long-legged for coverage change of direction, but big plays come from guys like Jamie Collins and Ryan Shazier, and I expect the same from Floyd.”

Falcons move Mike Person to guard
Person started 14 games at center last season for the Falcons, but the team is now switching him to right guard, according to the Atlanta Journal-Constitution.

Person, who had never started an NFL game until last season nor played center, will return to his natural position. He struggled snapping the ball last season and eventually lost the starting job to Gino Gradkowski for the regular season finale.

With the signing of center Alex Mack in free agency, the Falcons will slide Person over to right guard. Last season’s starter, Chris Chester was not re-signed.