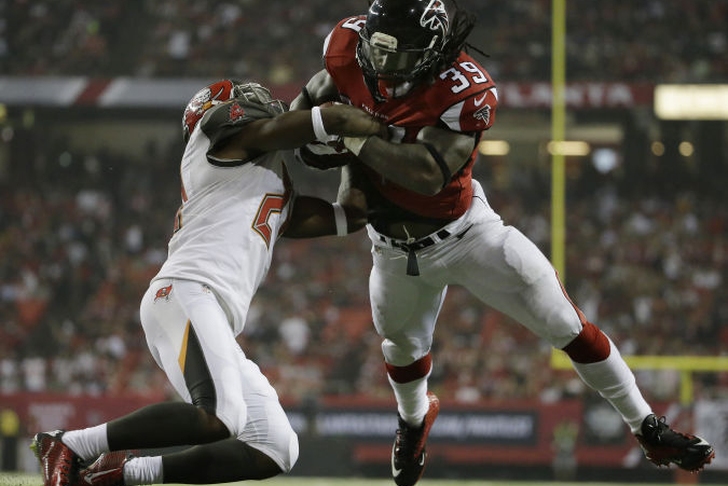 In a battle between two teams in the NFC South basement, the Atlanta Falcons got back on track with a win over the Tampa Bay Buccaneers.

After the Falcons retook the lead at 24-17, Atlanta's held strong on the next drive and forced a three-and-out. Matt Bryant's field goal on the next Falcons possession effectively put this game out of reach.

We can't pick just one, so we're giving it to both Roddy White and Julio Jones. It's obvious what a difference it makes when both of Atlanta's star WRs are at full strength, and today, they combined for 191 of Atlanta's 212 passing yards. White's 4th-quarter TD proved to be decisive.

Four players had more than four carries for the Bucs...but none broke the 40-yard mark on the day. With no rhythm or consistency in the backfield, it was almost impossible for Tampa to build momentum on offense.

On The Hot Seat:

The 3-6 Falcons needed this win to save Mike Smith's coaching job, and they granted him a temporary stay of execution today. Lovie Smith, though, is in real trouble. He'll need to turn this ship around in a hurry if he wants to feel confident about being back next fall.

The Falcons turn their attention to a tough road game at Carolina that could have massive implications in the race for the NFC South. Tampa will head to Washington next Sunday for a very winnable game against the Redskins.