Falcons Rumors: Top 10 Candidates To Replace Mike Smith If He Is Fired 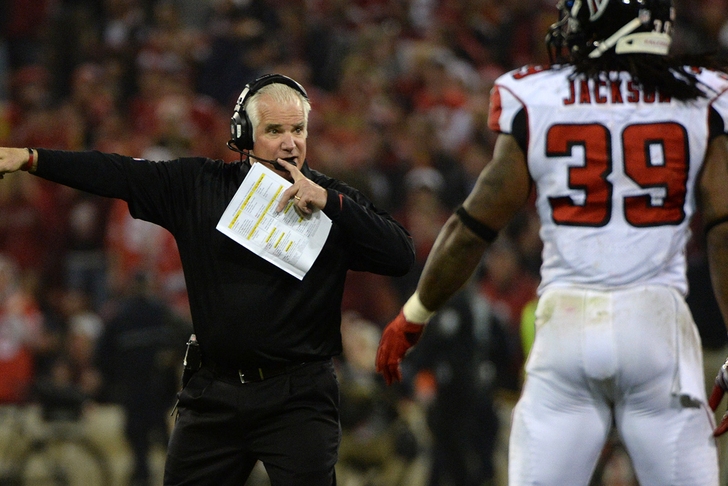 The Atlanta Falcons still have a chance to win the NFC South, but if they don’t, they’ll miss the playoffs. That would put head coach Mike Smith’s job in serious jeopardy. If he does get fired, who will the Falcons look at to replace him on the sideline?

Cowher hasn’t coached in the league since 2006, but has stayed in the game as an analyst for CBS. He’s won a Super Bowl and would immediately command respect from everyone in the locker room. Cowher has said he would come back to coaching if the right situation presented itself, and the Falcons have playoff talent.

If the Dolphins front office can coax Tony Dungy out of retirement, they’ll be rewarded with a Super Bowl-winning head coach who is 139-69 over 13 regular seasons with the Tampa Bay Buccaneers and Indianapolis Colts. Dungy has been off the sidelines since 2008, but a “retirement job” in Atlanta with a playoff-caliber roster could very well be intriguing to the current NFL analyst.

Ryan is well on his way out of the door with the New York Jets, but he'll still have plenty of coaching opportunities around the league. Many blame the Jets failures on general manager Jeff Idzik, and think that Ryan just needs to be in a new situation. He's one of the best defensive coaches in the league and would drastically improve one of the league's worst defenses, and he can keep his hands on that side of the ball as Atlanta has the offensive weapons to be effective.

Bowles has quietly led and constructed one of the league’s best defenses in Arizona, and they haven’t missed a beat despite having several starters hurt this season. He was the interim head coach for the Miami Dolphins in 2011, and is one of the rising stars in the NFL coaching world.

Bevell worked with Brett Favre and Adrian Peterson in Minnesota before moving to Seattle in 2011, where he’s helped develop Russell Wilson and built a dominant running game. He would bring a Super Bowl pedigree to a team that seems to have forgotten how to win.

Hamilton followed Andrew Luck from Stanford to Indianapolis, and he’s led outstanding offenses at each stop. He’s going to be a hot candidate for every opening across the league, but Atlanta has offensive weapons he hasn’t had before. This would be the best fit for him – if he decides to leave Andrew Luck’s side. Saban has dominated the college football world since taking over at Alabama in 2007, and has said that he likes the challenge of getting a team to the top more than keeping a team there. He’s also said that he doesn’t want to coach another college team, which leaves two options – retire or go to the NFL. Saban’s stint with the Dolphins in 2005-06 didn’t go well, but succeeding in the NFL is the only thing he has left to accomplish in his coaching career. If he does make the jump to the pros, the Falcons are the most likely destination. Atlanta presents an opportunity for quick success, something he needs at 63 years old.

Shaw leads one of the most notable pro-style offenses in college football, which has him near the top of Falcons owner Arthur Blanks' wish list. The Cardinal were not that successful this year with a 7-5 record, which has hurt Shaw's stock in the eyes of NFL teams. Atlanta is willing to still give him a shot if there were to miss out on their top targets. McDaniels seems to have totally rebuilt his reputation while leading the Patriots’ offense for the past three seasons after serving as the head coach in Denver. He doesn’t have any connection to the Falcons, but he does have a strong desire to become a head coach. Atlanta has a playoff-caliber roster already assembled, which would be very appealing to McDaniels. Blank likes the fact that McDaniels is young (38 years old) and already has head coaching experience, which is why he's this high on their list.

Gase is only in his second season as the offensive coordinator in Denver, but he’s already guided the best offense in league history. He’s proven he can handle star players and their egos. Gase will be the most sought-after candidate, and Atlanta might be one of the best jobs available this offseason.