Dealing With the Good and Bad of This Braves Offense 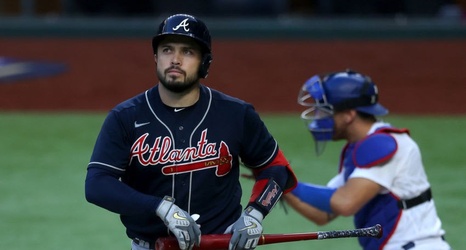 ARLINGTON, TEXAS - OCTOBER 17: Travis d'Arnaud #16 of the Atlanta Braves reacts after striking out against the Los Angeles Dodgers during the eighth inning in Game Six of the National League Championship Series at Globe Life Field on October 17, 2020 in Arlington, Texas. (Photo by Ronald Martinez/Getty Images)

Not much different than what we’ve seen the last couple of years, you have to learn to handle the highs and lows of this Atlanta Braves offense.

I’ve gone on record several times now saying that I don’t exactly love the offensive style and approach of this Atlanta Braves lineup.