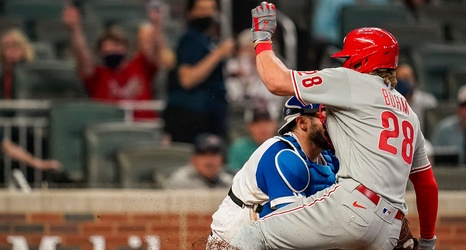 It's been some time since baseball had a major call controversy, but Sunday night's game between the Philadelphia Phillies and Atlanta Braves delivered. This time, it's Phillies third baseman Alec Bohm at the center of controversy on a sacrifice fly ball that gave Philadelphia a 7-6 lead in the ninth inning and, ultimately, the win.

With one out remaining in the top of the ninth, and Bohm on third, Didi Gregorius hit a short ball out to Marcell Ozuna in left field. As the ball was caught, Bohm tagged from third as Ozuna threw back home to catcher Travis d'Arnaud, causing a bang-bang play to happen at home plate, wherein Bohm was called safe.