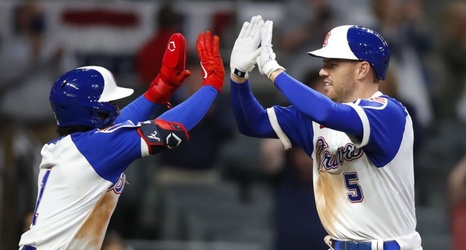 ATLANTA, GA - APRIL 09: Freddie Freeman #5 of the Atlanta Braves reacts after hitting a two-run home run in the eighth inning of an MLB game against the Philadelphia Phillies at Truist Park on April 9, 2021 in Atlanta, Georgia. (Photo by Todd Kirkland/Getty Images)

Atlanta Braves starter Ian Anderson ran into some trouble early as he gave up two runs in a 30-pitch top of the first to give the Phillies an early 2-0 lead.