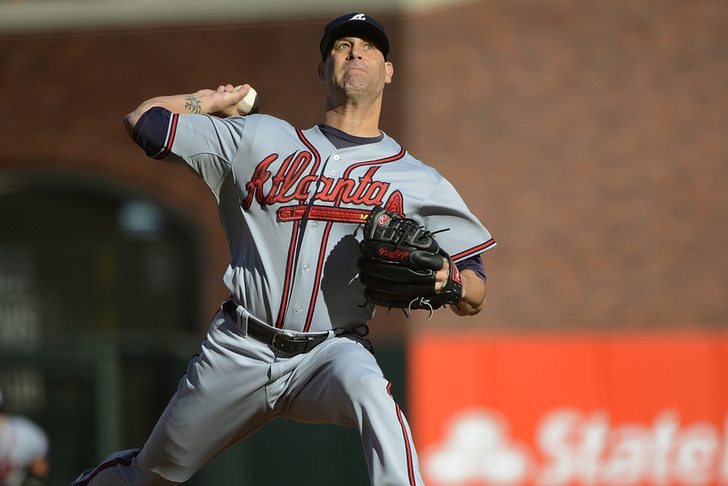 The news broke earlier this week that veteran right-handed pitcher Tim Hudson was on his way back to the Bay Area.

Hudson was offered a two year contract worth approximately 23 million by the San Francisco Giants. In terms of dollars, the money was more than the Braves could afford. As for location, the former Oakland Athletic had been rumored to wanting to return to the west coast. The move has now become a reality, and the Braves are stuck looking for an ace of their staff.

Before leaving Atlanta, Tim and his wife Kim had some final thoughts on their time in Atlanta.

Humbled by the kind words from amazing @Braves fans. We are grateful for every game Tim played, every teammate and coach, and our memories.

The Braves will likely look internally before pursuing a starter on the trade market. In the farm system, Atlanta currently has many strong arms who are close to being major league ready. One of those is right-handed pitcher J.R. Graham. In spring training, Graham was on the list of final cuts before the team headed to Atlanta for the season. The young hurler spent the year in "Double A" pitching for the Mississippi Braves. Graham was 1-3 in eight starts before suffering a season ending shoulder injury which led to Tommy John Surgery. While the statistics were far from perfect, Graham has shown signs of being an elite pitcher. In 2011 and 2012 combine, Graham went 12-2 in 26 starts. With the departure of Hudson, expect J.R. to be in the mix for being in the rotation once he returns from surgery.

Another candidate for the role is Alex Wood. Braves fans witnessed his debut this season in the majors, and quickly saw the promise he brings to the future for Atlanta. While his numbers as a starter were subpar, he did have some quality innings in relief. Wood is an inexpensive and cheap solution for the immediate future.

These internal options only fill the hole created by Tim Hudson temporarily. Thus, this may lead the Braves to offer a free-agent starter a multi-year contract. The biggest name on the market is Tampa Bay Rays superstar David Price. Price is potentially the most coveted free-agent on the market right now other than Robinson Cano. The price tag will be too much for the Braves and many teams however, and they will pass on Price.

So who's left? Two potential targets for Atlanta are Kyle Lohse and AJ Burnett. Atlanta could potentially get a steal with Lohse, but the Braves have had bad luck with Scott Boras' clients. He also is only a short-term solution. After having a sensational year with the Cardinals two seasons ago, posting a 16-3 record in 33 starts and a 2.86 ERA, Lohse struggled to be consistent in 2013. Lohse went 11-10 with a 3.35 ERA this past season with the Milwaukee Brewers.

The second option is AJ Burnett. The Pirates broke their streak of 20 consecutive seasons without a winning record, and topped it off by adding a postseason birth. Manager Clint Hurdle won the NL Manager of the Year Award, and center fielder Andrew McCutchen took home the hardware for NL Most Valuable Player. All is well in Pittsburgh, and it is possible Burnett will want to stay. The former Yankee will draw big money in what is a thin market for pitchers. AJ Burnett instantly adds a veteran presence at the top of the rotation, similar to that of Tim Hudson. Once again though, money will stand in the way. Burnett will likely be a Pirate next season or sitting at home.

The Atlanta Braves will need to secure a pitcher soon on the trade or free-agent market in the hopes of replacing Tim Hudson. It will be interesting to see who is No. 1 when the Braves open the 2014 season in Milwaukee.