How one man’s love for 'God' Paul McGrath led to an entire town in Ghana supporting Aston Villa! Now ONE THOUSAND chanting fans march through the streets on a matchday, and dream of spending a night sleeping in the Holte End 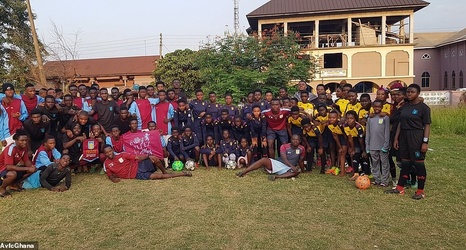 Eerily quiet matchdays have become the norm in England, but over 5,000 miles away supporters of one Premier League side are dancing in the streets... of Juaben.

A small town in the Ashanti Region of Ghana, the locals love their football and one team in particular. Not Manchester United, not Chelsea or Liverpool, but Aston Villa.

When the day their team plays comes around, much of the town wakes up at 5am, dons their claret and blue attire and begins marching, dancing and singing songs through the streets to passionately declare their love for the Midlands team.