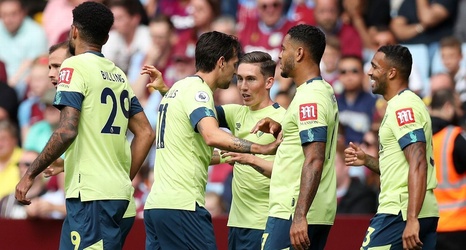 Two early goals were enough for Bournemouth to earn a 2-1 win over Aston Villa on Saturday to leave the newly-promoted hosts pointless after two games of the new Premier League season.

Villa got off to the worst possible start as Tom Heaton, making his home debut, brought down Callum Wilson in the penalty area inside 40 seconds, with Josh King sending the goalkeeper the wrong way from the spot.

Things went from bad to worse in the 12th minute as a mistake from Douglas Luiz, another close season signing, was seized upon by Bournemouth midfielder Harry Wilson who fired into the net, via a deflection off Tyrone Mings.