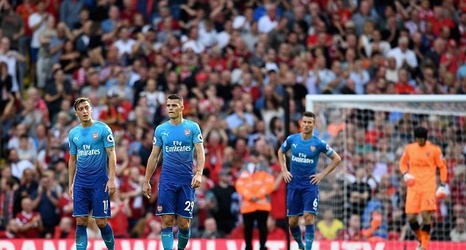 Steven Gerrard has admitted he 'loved' watching Arsenal against Slavia Prague on Thursday as the Gunners stared down their Czech opponents while taking the knee before beating them 4-0.

The Gunners thrashed Slavia to win 5-1 on aggregate and advance into the Europa League semi-finals, after the Czech Republic giants had beaten Gerrard's Rangers in the previous round.

The last-16 second-leg in Glasgow was marred by Rangers midfielder Glen Kamara accusing Slavia's Ondrej Kudela a 'f***ing monkey' in the closing moments of the game.

A day after Kudela was banned for 10 UEFA matches for racist abuse, Arsenal took the knee on Thursday night in front of Slavia's players - who chose to stand arm in arm with each other during the gesture.