'Someone check on Ben White...': Liverpool fans twist the knife in as they remind Arsenal star about laughing at Takumi Minamino's first-leg miss, after Diogo Jota ran defender ragged in Liverpool's semi-final win 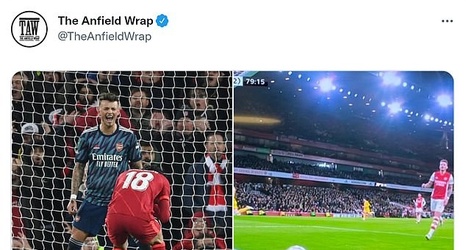 Plenty of Liverpool fans gleefully stuck the knife into Ben White after the image of him laughing in Takumi Minamino's face came back to bite him.

The picture went viral after 10-man Arsenal held Jurgen Klopp's side to a 0-0 draw in the Carabao Cup semi-final first leg.

It showed Minamino with his head in his hands after missing a chance with White laughing in front of the goal.

Liverpool fans were quick to remind White about it after the Reds came through to beat Arsenal 2-0 in the return on Thursday night.