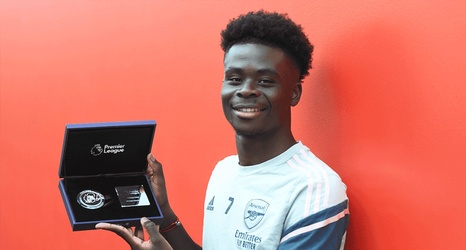 Bukayo Saka and Aaron Ramsdale have been rewarded by the Premier League after reaching 100 appearances in the division.

The duo picked up their awards after recently reaching the milestone, which are given to every player who has made a century of top-flight appearances.

Saka completed his ton in the 3-0 win against Bournemouth in August, having made his league bow on New Year's Day 2019 against Fulham as a late substitute, becoming the first player born in the 21st century to play in the division.

In the process, the attacker became the second youngest player to play 100 times for us in the Premier League, behind only Cesc Fabregas, and in his first 100 games he scored 17 goals while assisting 15 more.