'Our team is so polite. They're such gentlemen': Dundalk boss Filippo Giovagnoli heaps praise on his players as they become first side in Europa League history not to commit a single foul in their defeat at Arsenal 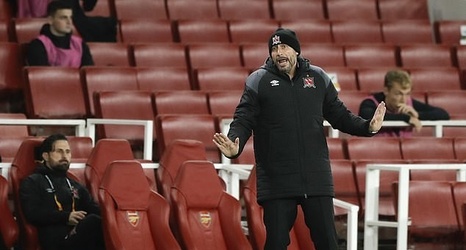 Dundalk boss Filippo Giovagnoli praised his side's gentlemanly conduct at Arsenal as the Irish side became the first team to not concede a foul in a Europa League match.

The Lilywhites were comprehensively beaten 3-0 by the Gunners on Thursday night thanks to goals from Eddie Nketiah, Joe Willock and Nicolas Pepe but had an impeccable disciplinary record at the Emirates Stadium clash.

Italian interim boss Giovagnoli maintained that his side still fought hard during the game but chose not to use brute force to stop Arsenal from attacking them.

The Dundalk manager said after the game: 'Our team is so polite.