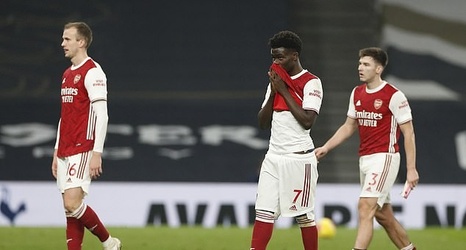 Mohamed Elneny insists there is 'fight' within the Arsenal squad to address their poor start to the Premier League season.

The Gunners cruised through their Europa League group, a 4-2 victory over Dundalk on Thursday night seeing them progress with six wins from as many games.

But it has been a different story domestically as defeat to Tottenham in the north London derby last weekend left Mikel Arteta's side 15th in the table.

Arsenal's league form has been disastrous, lying 15th and 11 points behind leaders Spurs

Their Europa League form is different story, topping Group B after a 4-2 win over Dundalk

Arsenal's last league win was a 1-0 victory at Manchester United on November 1 and they have scored just 10 goals in 11 matches, only the current bottom three have managed fewer.