Mikel Arteta 'facing revolt at Arsenal after senior players express frustration at being blamed for Gunners' woes... while Spaniard's tactical prowess is also being questioned' with club in bottom half of the Premier League 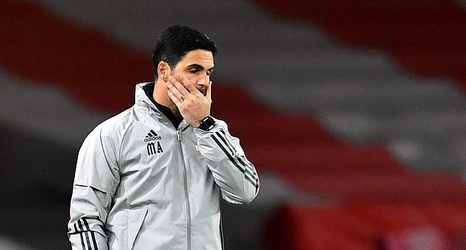 Arsenal manager Mikel Arteta is facing a backlash from his players over his not taking responsibility for the Gunners' poor season and blaming them instead.

Senior squad members have reportedly began to voice their concerns over Arteta's tactical decisions and treatment of some players, according to The Sun.

The club's woes have come to the point where some senior players are questioning Arteta's methods, such as leaving out players following a poor result.

Such was the treatment of club captain Pierre-Emerick Aubameyang, who was relegated to the bench for Arsenal's dismal 1-1 draw with Slavia Prague in the Europa League quarter-final first leg after playing badly in the Gunners' 3-0 Premier League loss to Liverpool.