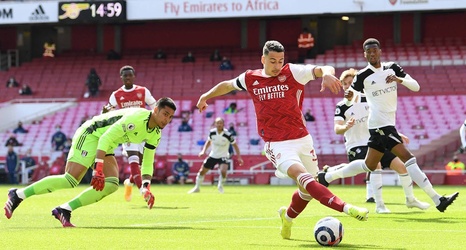 Eddie Nketiah scored a last-gasp equaliser to rescue a point against relegation-threatened Fulham.

Josh Maja's penalty looked set to condemn us to a shock defeat, but goalkeeper Mat Ryan came forward to flick on a 97th-minute corner and Nketiah scored from close range after Dani Ceballos' shot was parried.

It was no less than we deserved after dominating a game that also saw us lose the in-form Alex Lacazette to a second-half injury.

Lacazette was prominent as we made a positive start.

Just 33 seconds had elapsed when Gabriel Martinelli raced onto the Frenchman's lofted ball over the Fulham defence and lifted his shot over Alphonse Areola, but it dropped just wide.