Martin Odegaard believes Arsenal can win the Premier League title 'within a couple of years' as £30m midfielder sets lofty ambitions for Mikel Arteta's side... who currently prop up the table after losing their first three games 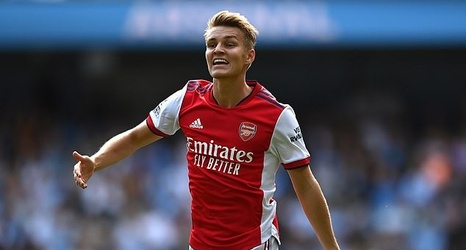 Martin Odegaard believes Arsenal can win the Premier League 'within a couple of years' despite the Gunners' dreadful start to the current campaign.

Mikel Arteta's side sit bottom of the table having lost their three opening matches to Brentford, Chelsea and Manchester City, conceding nine goals while failing to score one.

But Norwegian midfielder Odegaard, who signed from Real Madrid in a £30million deal having spent the second half of last season on loan at the Emirates Stadium, has big ambitions.

'We want to get back to European football this season, that would be important for the players, for the club and for the fans,' he told Sky Sports.