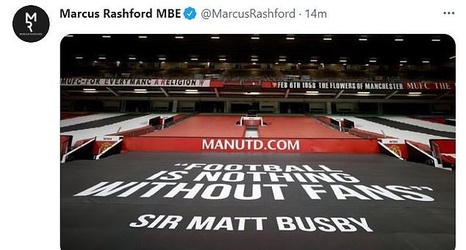 The Manchester United striker joined team-mate Bruno Fernandes in hitting out at the formation of a European Super League on Tuesday.

The Premier League's so-called Big Six of Manchester United, Man City, Liverpool, Chelsea, Arsenal and Tottenham are founding members of the controversial new breakaway tournament that would replace their European commitments with UEFA, such as the Champions League.

Fernandes said 'dreams cannot be bought' on Monday and now Rashford has condemned the concept by posting an image onto Twitter of one of the banners which covers the stands at Old Trafford.