'I did not expect this:' Bukayo Saka is SHOCKED after winning England Player of the Year... as the Arsenal star beats Tottenham striker Harry Kane and West Ham anchor Declan Rice to the award 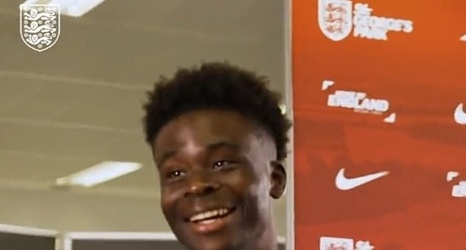 Bukayo Saka looked visibly shocked as he was handed the England Player of the Year award on Friday.

The Arsenal star, who edged England captain and runner-up Harry Kane and third-place finisher Declan Rice to the gong, was deemed England's standout performer over the last 12 months by voters.

Saka, 21, made nine international appearances this season for the Three Lions and chalked up three goals, putting in a man-of-the-match performance during England's 4-0 victory against Andorra on his birthday last September.

A special surprise in a 'standard' press conference ud83dude05