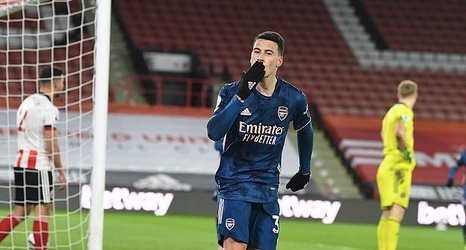 Arsenal forward Gabriel Martinelli has allayed fears that he has suffered another injury after confirming he is 'alright to play' in their crunch Europa League second leg against Slavia Prague.

The 19-year-old started a Premier League game for the first time since late January against Sheffield United on Sunday, and netted his first goal for almost 15 months in the Gunners' 3-0 win at Bramall Lane.

But the Brazilian was replaced by midfielder Mohamed Elneny in the 83rd minute after appearing to take a knock to the ankle, leading to concerns he had suffered an injury setback following his long-term knee issue last year.