Gabriel Jesus: Can striker be Arsenal's saviour in quest for the top four? 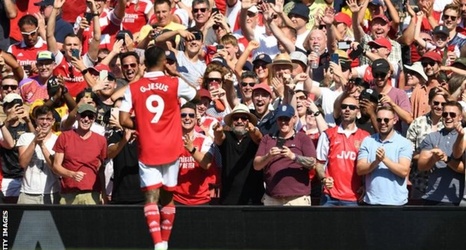 Gabriel Jesus was brought to Arsenal to get them back into the Champions League after a six-year absence - and early signs suggest he is relishing the chance to be first choice rather than second fiddle.

The striker, 25, performed admirably in a star-studded squad in his six years at Manchester City, but the arrival of Erling Haaland prompted a move. Arsenal's former City coach Mikel Arteta needed a point man at Emirates Stadium, and Jesus looks to have grabbed the chance with both hands.

It's early days, but two goals and two assists on his home debut - a 4-2 win over Leicester City - and a rapturous reception from Arsenal's home fans suggest that the Brazilian is a good fit for his new club.