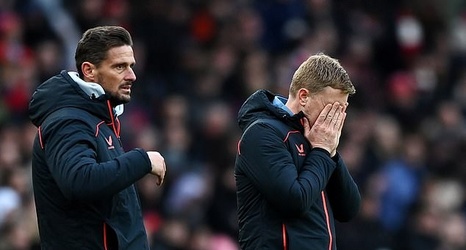 Newcastle manager Eddie Howe has admitted they have a 'big task ahead' following their 2-0 defeat to Arsenal.

Howe was in the dugout for the first time since he replaced Steve Bruce as manager, as goals from Bukayo Saka and substitute Gabriel Martinelli sank the Magpies.

The result leaves them bottom of the Premier League table and still looking for their first win after 13 games.

Howe though said he saw positive signs from his side's performance despite the defeat.

He told BT Sport: 'I saw a committed team, the players gave everything.