'Can you pass it one touch? Then why don't you do it?!': Touchline mics pick up Thierry Henry's huge frustration at his Montreal Impact players failing to complete 'easy' tasks in an insight into his managerial style 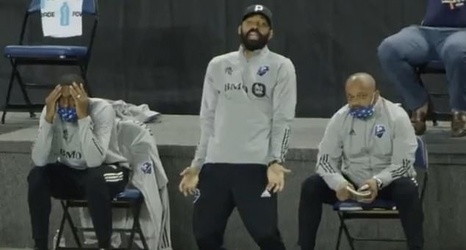 Touchline microphones have picked up a fascinating insight into Thierry Henry's management style at Montreal Impact as he lambasted his players from the sidelines.

The Frenchman was recorded during his side's 3-2 defeat by New England Revolution earlier this month and the soundbites made for a brilliant listen.

Clearly frustrated by his players' inability to carry out his instructions, Henry yelled at a number of them for various shortcomings.

Can we get a mic check on coach Thierry Henry? ¿¿ pic.twitter.com/gE0hLVHW6X

He then turns his attention to Amar Sejdic, saying: 'Don't blame anyone else, you turned the wrong way!