Bukayo Saka is ruthlessly mocked after England's dire 1-0 loss in Milan... as the Italian press hands him their LOWEST player rating and jokes that the winger is 'still shocked' by Giorgio Chiellini’s tactical foul at Euro 2020 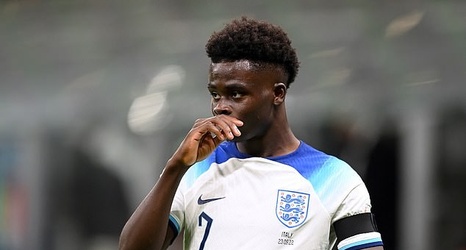 Bukayo Saka has been the target of ruthless mocking by the Italian press following England's dreadful 1-0 defeat to Italy in Milan on Friday.

La Gazzetta dello Sport quipped that Saka still looked shocked by Giorgio Chiellini’s tactical foul in the Euro 2020 final, which resulted in the winger missing a crucial penalty to hand Italy the trophy.

The Arsenal star, who was named England's Player of the Year ahead of kick-off, played 72 minutes at the San Siro before Gareth Southgate substituted him in a bid to get back into the game.