Arsenal's Granit Xhaka sees himself as a ROLE MODEL for young players despite receiving five red cards... the new All of Nothing docuseries shows a different side to the midfielder and his wife reveals he doesn't sleep a wink after a bad performance 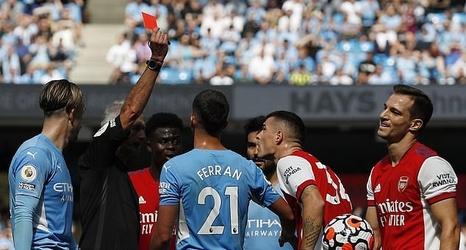 Arsenal's Granit Xhaka is one of the most criticised players in English football, including by his club's own fans, but he may also be one of the most misunderstood, according to the new All of Nothing docuseries.

The combative midfielder plays the game on the edge, and consequently divides opinion.

The Switzerland international has split the Gunners fanbase ever since he joined the club from Borussia Monchengladbach in the summer of 2016.

Not least because he has clocked up five red cards in five years at Arsenal, including two in the last season.

The latest, just 24 minutes into the EFL Cup semi final first leg at Liverpool in January, could easily have cost his side the tie before it had even got going, and it prompted Gooners to take to social media, again, to castigate their former captain.