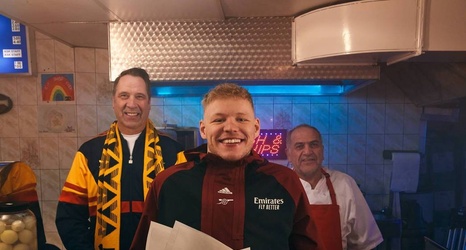 Aaron Ramsdale is the latest Arsenal star to back our local businesses, this time with Holloway Road fish bar the Chip Inn, as part of the Arsenal Supporting Supporters series.

Inspired by player-business partnerships of yesteryear and kicked off by local pub, The Tollington and Rob Holding, this is the fourth instalment in a series of local businesses pairing up with members of the Arsenal men’s and women’s teams to raise awareness of their services and drive footfall on and around matchday. Many local businesses and community organisations who surround the local area were just as pleased as the club to see fans return to Emirates Stadium after matches were played behind closed doors.