Arsenal players roar their approval at private All or Nothing screening as they celebrate Emile Smith Rowe's goal against Tottenham and cheer at his incredible ball skills... while Mikel Arteta insists the series captures 'who we are' 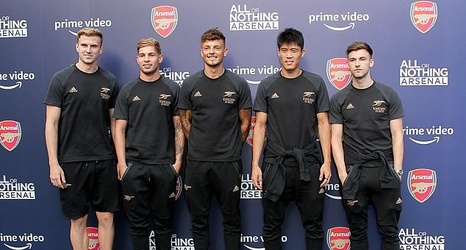 Five first-team stars, including Ben White and Emile Smith Rowe, along with manager Mikel Arteta and his family, had gathered at a cinema in Islington, North London, just over a mile from the Emirates Stadium, to watch the Amazon Prime Video production alongside 150 invited guests

Sitting in the balcony seats, Kieran Tierney, Rob Holding, Takehiro Tomiyasu and staff laughed and cheered as the story of their season unfolded on the big screen.