Arsenal outcast Konstantinos Mavropanos admits his future with the Gunners is up in the air... as the 23-year-old centre back says it is 'very good' that the option to stay at loan club Stuttgart is on the table 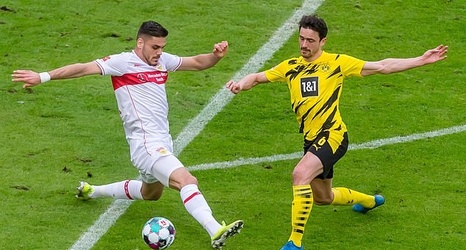 Arsenal outcast Konstantinos Mavropanos reveals it has not been decided whether he will return to the Emirates following his season with Stuttgart.

The centre back, who has played just eight times for the Gunners since his arrival in January 2018, has featured 18 times for the Bundesliga outfit this season and received his first international call-up for Greece last month, making his debut for his country in a friendly against Honduras.

Mavropanos spent half of last season on loan at 2. Bundesliga side Nurnberg and doesn't appear to be in Mikel Arteta's plans for next season despite a new contract last summer.