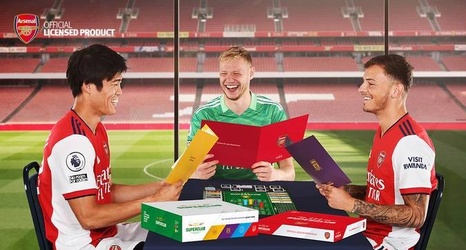 After months of development, we’re proud to announce the launch of the official Arsenal expansion pack to leading football management board game, Superclub.

Superclub launched in October 2020, becoming an instant hit among football fans around the world with unprecedented demand. The core gameplay is based on four fictional teams all harbouring aspirations of becoming a Superclub, defined as achieving a 100-points season or winning the Supercup.

Our ‘first-of-its-kind’ official expansion pack gives supporters the opportunity to add a fifth team to the game, Arsenal. As a licensed product, the 2021/22 Arsenal expansion pack contains the entire first-team squad, select under-23s, Highbury and Emirates Stadium, and everything needed to manage the club to glory in a tabletop race to 100-points against friends and family.