Arsenal 5-1 Everton: Mikel Arteta's side miss out on a spot in the next year's Champions League as Gabriel Martinelli, Eddie Nketiah and Martin Odegaard strike to see the Gunners smash Toffees on final day of the season 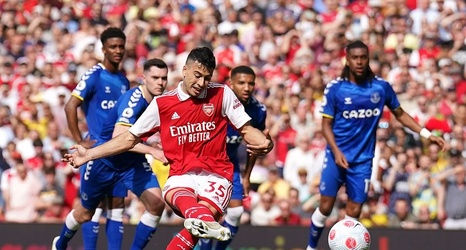 Arsenal missed out on a spot in next year's Champions League despite beating Everton 5-1 in their final game of the Premier League season.

The Gunners broke the deadlock after 26 minutes when a VAR decision ruled that Alex Iwobi handled the ball in the area, before Gabriel Martinelli stepped up and rolled the ball into the net. Arsenal doubled their lead minutes later when Eddie Nketiah guided a header past Jordan Pickford.

Donny van de Beek pulled one back on the stroke of half-time, before Gabriel, Cedric Soares and Martin Odegaard rounded off the scoring for Arsenal in the second-half.