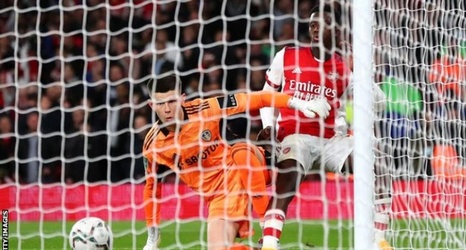 Arsenal boss Mikel Arteta says Eddie Nketiah has a future at the club after he scored to help the Gunners see off Leeds United and reach the Carabao Cup quarter-finals.

Substitute Calum Chambers' header crept over the line seconds of coming off the bench, before former Leeds loanee Nketiah pounced to wrap up the tie.

The forward cleverly flicked the ball over a stranded Illan Meslier and just did enough to nudge it over the line before the visiting keeper could recover.

"I have full belief that he is going to be a top, top player and hopefully at Arsenal," said Arteta, who has helped develop a number of young Arsenal players, including Emile Smith Rowe and Bukayo Saka.