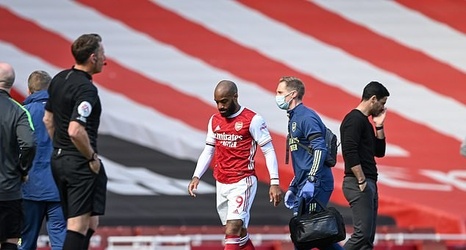 Alex Lacazette is set for a scan on Tuesday to determine the severity of a hamstring injury that threatens to rule him out of the Europa League semi-final against Villarreal.

Arsenal were trailing to Fulham when Lacazette pulled up in pain, clutched the back of his left leg and hobbled down the tunnel in despair with his shirt pulled up over his face.

'We will have to see,' said boss Mikel Arteta. 'He felt his hamstring. He will have a scan on Tuesday probably and we will see the extent of the injury and see the length of time he will be out.