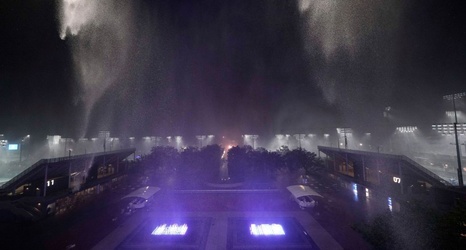 NEW YORK -- Rain pelted down the gaps in the roof of Louis Armstrong Stadium on Wednesday night, disrupting second-round play at the US Open.

Arthur Ashe Stadium and Louis Armstrong are the only courts at Flushing Meadows that can be covered during bad weather, but even that was an issue as wind helped push rain through the space between the concourse and the retractable cover at Armstrong. After two hours of steady rain, the stadium was completely soaked, halting play on the show court.

ESPN analyst Darren Cahill chronicled the events in a series of tweets.