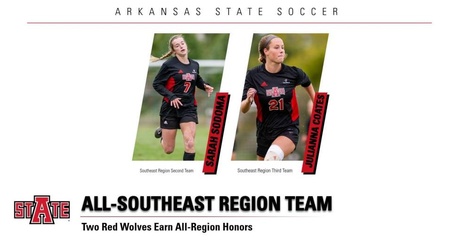 Junior forward Sodoma, was named All-Second Team Southeast Region after leading Arkansas State with nine goals the regular season, which tied for the second most among Sun Belt leaders. Her team-high 22 points was ranked second in the league, while her six assists tied for fourth most in the SBC.

The Manchester, Mo., native finished the SBC tournament with five shots, three of which landed on target as she scored once. Sodoma buried the game-winning penalty kick, as the Red Wolves advanced to the semifinals on a 4-1 pk victory over Texas State.

Tulsa, Okla., native Coates was named All-Third team Southeast Region after showcasing strong distribution skills at center back while being a threat moving forward on corners and free kicks.