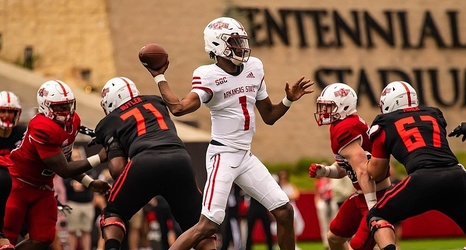 The former is entering his sixth year of college football at his second school, once again looking to stake his claim to a starting spot. The latter is an early enrollee who could just have easily spent this weekend at his senior prom instead of Arkansas State's spring game.

On a day that provided few highlights, most of the attention was on the two guys in white -- quarterbacks wore white jerseys rather black or red as the rest of teammates did -- as the Red Wolves wrapped up the last of their 15 spring practices with a full-length intrasquad scrimmage at Centennial Bank Stadium on Saturday afternoon.