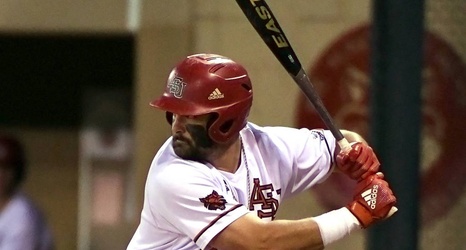 Kyle MacDonald displayed impressive offensive effort in the fifth, to pull within 6-10, when he launched a two-run home run to left center. TheMississauga native struck again in the sixth when he ripped a two-run double to left center bringing across Will Huber and Karsen Reid.

MacDonald finished the night three-for-four with six RBIs, two doubles, a walk and a run while taking over the team-high in RBIs.

A-State got two runs back in the third, to pull within 8-3, when Sun Belt Preseason Player of the Year MacDonald ripped a two-run opposite field double to right center bringing across Drew Tipton and Eli Davis.