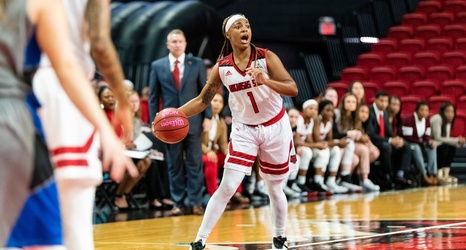 SAN DIEGO (11/30/19) – Traveling nearly 2,000 miles across the country and sending out a new-look starting lineup, the Arkansas State women’s basketball team faced some adversity on Saturday at San Diego State.

But, as the clock hit all zeroes, head coach Matt Daniel let out an exuberant “Yes sir!” as the Red Wolves held off the tough Aztecs for a 71-62 victory at Steve Fisher Court at Viejas Arena.

“We played focused,” Daniel said. “We were locked in. We could change defenses on the fly and call sets. They let me coach them and let me scheme.