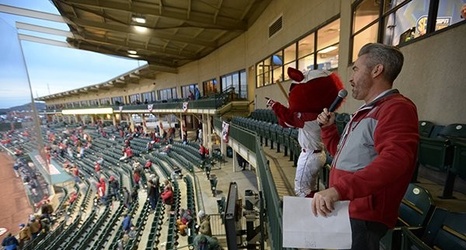 FAYETTEVILLE — As an all-in fan and former Arkansas player, Baum-Walker Stadium public announcer Jon Williams has a different directive in the booth this weekend.

The excitable Williams, one of Northwest Arkansas’ longest-running radio personalities who is in his fifth year as the PA voice of the Razorbacks' baseball team, has to treat everyone in the Fayetteville Regional fairly and not show any favoritism.

That's because while Arkansas has home-field advantage, the stadium is technically a neutral site controlled by the NCAA during regionals or super regionals.

“I am unapologetic, unabashed, not objective guy who loves the Razorbacks and wears it on my sleeve,” Williams said.