'What a night': Spartans record biggest win in years 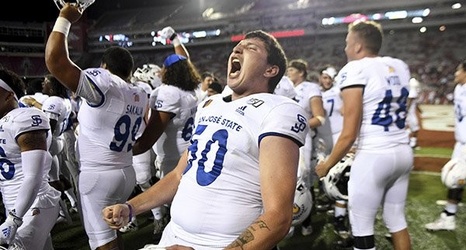 FAYETTEVILLE — San Jose State had a lengthy list of accomplishments in its 31-24 victory at Arkansas on Saturday.

The Spartans won their first game against an SEC opponent in seven tries, scored their most points ever against an SEC team, beat their first Power 5 opponent since defeating Stanford in 2006 and intercepted five passes for the first time since 2008.

Not to mention San Jose State caught the attention of college football fans and media across the country by winning as a 20 1/2-point underdog.