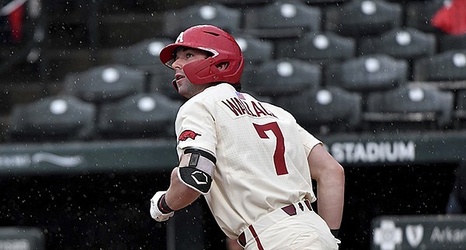 FAYETTEVILLE — Cayden Wallace was batting .077 when Arkansas coach Dave Van Horn shook up the lineup for a Feb. 26 game against Southeast Missouri State.

Van Horn moved Wallace from the bottom third of the batting order to the middle of it as the clean-up hitter.

“He probably thought I was nuts when I put him in the four hole,” Van Horn said this week during an interview on ESPNU Radio. “All he did was respond with a couple of home runs, and his batting average has jumped up.”

On the night he moved up in the order, Wallace hit a two-run home run in the bottom of the sixth inning to break a 2-2 tie, the first of two homers that weekend for the freshman from Greenbrier.