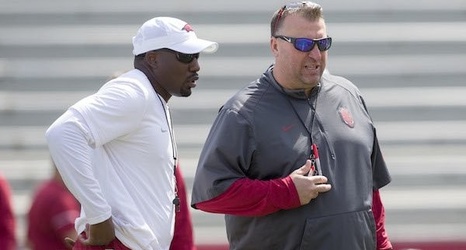 FAYETTEVILLE — University of Arkansas trustees in a meeting Tuesday approved the maximum amounts that could be paid in salary and bonuses to 80 Razorback coaches, administrators and support staff in the upcoming fiscal year.

The approved amounts represent base salaries and conditional performance bonuses for the employees, but don’t necessarily represent pay raises.

Bonuses for coaches are awarded for competitive success and, in some cases, meeting graduation rate and academic progress goals for their athletes.

For example, Arkansas football coach Chad Morris was approved for maximum compensation of $4.7 million for the next fiscal year.