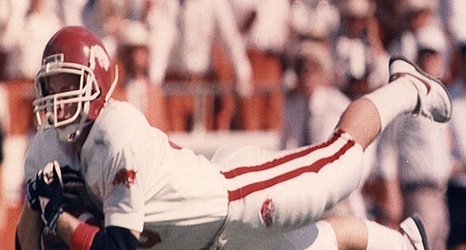 FAYETTEVILLE — Tim Horton is thankful for many things that led to his induction into the Arkansas Sports Hall of Fame.

His relationships with his University of Arkansas teammates, his fellow coaches, the athletes who have played for him, and the families from which he recruited them stand out in the mind of Horton, 53, a legacy inductee as the son of longtime Arkansas assistant coach and University of Central Arkansas head coach Harold Horton.

Then there’s the hierarchy of accomplishments for the longtime running backs coach who joined Troy Calhoun’s staff at the Air Force Academy this winter for his second stint with the Falcons in Colorado Springs, Colo.