'They took it to us': Hogs embarrassed by struggling Spartans 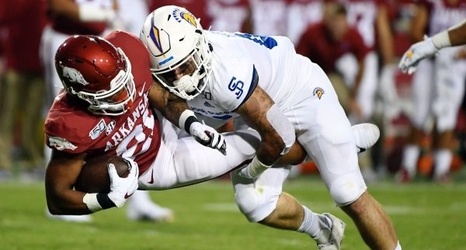 FAYETTEVILLE — One week ago, Arkansas coach Chad Morris said momentum was wearing a Razorbacks jersey after a fourth-quarter flurry led to a 21-point win over Colorado State.

Saturday night, momentum removed its Arkansas jersey and tossed it aside.

Another porous defensive effort from the Razorbacks - 503 yards allowed - combined with five interceptions from quarterback Nick Starkel and two crucial turnovers on downs added up to the most embarrassing loss of the Morris era. San Jose State, which entered the game with a 4-23 record under coach Brent Brennan, secured a program-defining 31-24 win in Razorback Stadium.